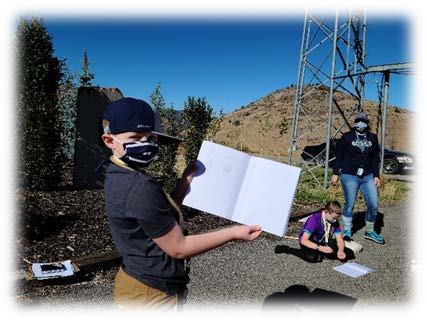 Since 2014, the Cache County Vegetation Management crew has involved elementary school students in biocontrol projects at the Hardware Ranch Wildlife Management Area (HRWMA). The students learn about noxious weeds, how to release biocontrol agents and monitor sites of previous releases. The students, from Logan School District and USU’s Edith Bowen Elementary, lend valuable assistance to the program, while gaining an interest in noxious weed management and biocontrol. The project is under the direction of Jake Forsgren, Cache County Vegetation Manager and Amber Mendenhall, Utah Weed Supervisors Association Biocontrol Coordinator.

Cache County’s school biocontrol program expanded this year to include five field days, two noxious weeds and four biocontrol agents. The county was unable to host as many different groups of students due to COVID-19 risk. However, several small groups of students visited Hardware Ranch. All education groups were able to follow state and local COVID-19 guidelines including groups of under 20 wearing masks and being socially distanced outdoors.

The Cache County Weed Department helped to conduct biocontrol releases and monitoring when students were unable to participate. Cache County was especially helpful in stepping up to assist with this program on several days throughout the year.

Students and weed managers monitored sites for biocontrol efficacy. Monitoring is conducted using the US Forest Service SIMP protocol. When conducting SIMP monitoring with student groups, instructors modify the protocol to allow for random sampling. Otherwise, plots are often trampled and students seem to lose focus by the time they reach the end of the transect. We have adapted the SIMP protocol by having students break off into several groups over a one acre area. Students stand with their back to an infestation of noxious weeds and gently toss monitoring frames over their head. This allows them to select noxious weed patches, but still take a random sample.

The Cache County group, led by Amber Mendenhall, continued monitoring on the Upper Meadow Knapweed site from 2019. Curtis Creek Bridge site was also continued from 2019. The Canada Thistle Upper Meadow site has been monitored continuously since 2017. They selected one new site for Canada thistle monitoring in 2020. Technicians at HRWMA found a new patch of noxious weeds near the bunkhouse. The weed managers plan to release biocontrol agents at the bunkhouse in 2021.

The student biocontrol program is a great way to combine treatment, monitoring and education. In spite of the unusual circumstances, program leaders were able to reach 48 students over four days in 2020. They were also able to facilitate three additional biocontrol release and monitoring field days with Cache County Weed Department. This year they also contacted the neighboring 36,000 acre property to help monitor and conduct biocontrol release. This was a great opportunity to increase noxious weed awareness among neighboring landowners.

The crews released 4000 biocontrol agents over five sites. They also placed monitoring plots in four locations. As this program continues, they will add monitoring plots and increase the quality of ongoing data.
Some successes in 2020 include the discovery of two newly established biocontrol agents on spotted knapweed. This is the first year that they recovered galls from theCanada thistle gall fly at the Back Meadow.

This is an excerpt from a report prepared by Amber Mendenhall. To read full details of this project including monitoring results, download the complete report here: 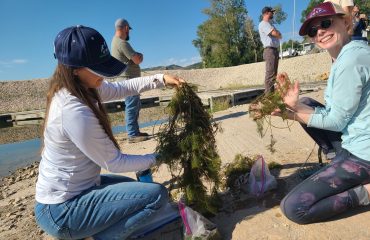 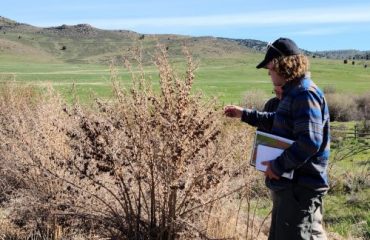 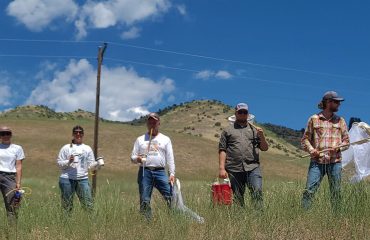